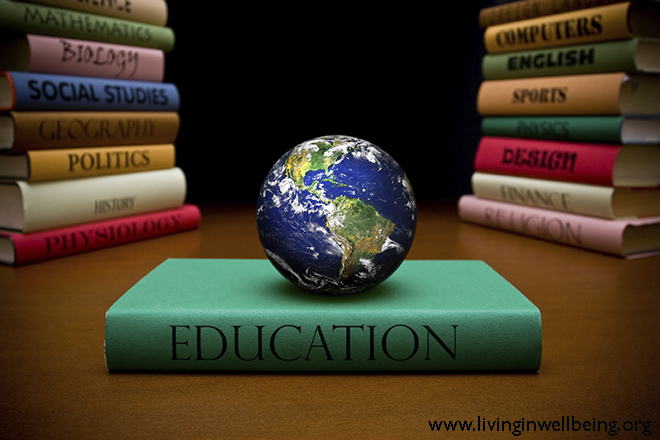 According to Unicef, the global children's rights advocacy organization, in addition to, defining education as, "acquiring skills or the transmission of knowledge" they also relay, "it improves children's lives and the lives of those with whom they come in contact."

Taking this idea a step further, we discover there to be no one right way to obtain an education. Some people learn in schools. Others acquire information from work done in the field. And, still others either learning challenged or driven to attain success (or both), become educated via one-on-one sessions with tutors.

Regardless of the way in which one receives an education, there remains one certainty-education provides a critical element in the quality of one's life.

While some define 'quality of life' in terms of monetary achievements, others consider a 'rich life' to be one that is filled with a deep understanding of subjects, ideas and concepts; a foundation upon which future learning can be had and associative actions can be taken.

Complementing the idea of knowledge and education, many also believe that personal satisfaction, inner confidence and regimented discipline go a long way in contributing to a strong 'quality of life.'

Because money is a necessity to live, we will begin by looking at the financial expectations and related opportunities connected with increased levels of education.

As a whole, adults between the ages of 25 and 64 earn an estimated $34,700 per year. Yet, when looking at approximated annual earnings, stark differences emerge based upon the degree to which an individual has been schooled:

In response to the statistics and the voluminous high school drop-out in the US, Dr. Jaquelyne P. Robinson, a workforce development specialist with the Alabama Cooperative Extension System, stated, "Dropping out of high school puts students at a disadvantage for life."

A survey released from the US Census Bureau indicated that, over the course of their life, college graduates working full-time between ages 25 and 64 (span of a person's work life) can expect to earn $2.8 million Note: Holders of masters' degree can expect to earn close to $3.0 million.

Over the course of an individual's work life this may equate to more than $4.5 million. No surprise, then that the aforementioned figures show a direct correlation between higher levels of education and higher earnings.

Consider for a moment the example of doctoral graduates who, on average, earn five times that of an uneducated, high school drop-out. Over the span of 30 years time, the additional amount could well exceed $3 million dollars.

Rather than glossing over the sizable costs involved in getting an education (the higher the degree, the greater the cost), what we intend to point out is that, over time, a person's lifelong earning potential rises in proportion to hisher acquired level of education.

Thus, within several years working in hisher chosen field, a person's earnings will, ideally, allow for the restoration of hisher original educational costs.

Apart from monetary gains, one of the other pivotal benefits of acquiring an education is the wealth of opportunities that may ensue.

Though contingent upon one' level of education, one of the many wonders of having an education is that it opens doors to a host of opportunities that otherwise may never have been imaginable, let alone attainable.
Leveling the playing field, updating one's skills to meeting changing conditions within the marketplace, and contending with the increased competition among peers and colleagues; are just a few of the many areas in which higher levels of education can prove to be a tremendous asset.

Dependent upon one's personal goals, e.g., scoring better grades, getting into a good college, landing an impressive first job or getting a big promotion; all along the path of life education provides the tools individuals need to succeed in their chosen pursuits.

Aside from economical and opportunistic reasons, the act of acquiring an education requires dedication, discipline and a sustained, focused drive.
Typically speaking, people who have earned advanced levels of education come across to others as having a good work ethic and a favorable, can-do, attitude.
Additionally, based upon one's educational level (high school, college or graduate level) and applied to various lifestyle categories, specific attributes associated with varying levels of education include:

-- With respect to health matters

- Across the United States, 82 percent of individuals with a high school diploma reported being in 'excellent, very good, or good' health, compared to 93 percent of those with a bachelor's degree.

- At the state level, respondents with bachelor's degrees reported between 5 and 23 percent higher rates of good health than those who had earned only a high school diploma.

-- With respect to volunteer efforts

- While twenty-one percent of the U.S. high school graduation population ages 25 and up reported that they had done volunteer work, 36 percent of those with a bachelor's degree (or higher) reported donating their time in a volunteerism fashion.

-- With respect to voting behaviors

- Fifty-six percent of U.S. citizens ages 25 and up with high school diplomas responded voting in the last major presidential election whereas 76 percent of those with bachelor's degrees reported doing the same.

As adults, the value of obtaining an education (high school graduate, college graduate or advanced degree) can be seen among some of the following lifetime factors.

With increased levels of education, due to individuals' increased abilities to earn higher salaries and obtain greater value-added work benefits (insurance and investment packages), their reliance upon the government lessens and they are able to give back more (economic-wise) to the community and society.

Looking at society as a whole (rather than at each individual), the more educated a population is the more likely the following positive outcomes are to occur: lower incidences of crime rates; greater incidences of charitable giving; higher levels of involvement in civic matters (politics and elections); and more advanced skill sets whereas technology is concerned.

Along with the more outward demonstrations, an educational program can help bring about such non-academic shifts as: development of self-esteem, confidence, trust, and the ability to easily contend with such early age challenges as bullying and discrimination and such major life changes as marriage, divorce, birth of a baby, andor lose of a job.

Furthermore, education can also bring about the following qualities:

- Inclusiveness-whereby students, regardless of their backgrounds, feel a part of something bigger than themselves
- Lifelong learning-providing the individual with a part of themselves upon which they can build as they move through their life.
- Voicepurpose-offers the individual a manner of expressing themselves within an intelligent, well-informed manner (hence alleviating shame and embarrassment while instilling a sense of confidence and empowerment).
- Clarification of Values-through knowledge and insight gained, the individual is able to form hisher own opinions and beliefs (hence, develop a sense of self).

Apart from knowledge itself, the acquisition of an education provides individuals with a host of 'hard' benefits from increased workplace opportunities and greater earning potentials, all of which contribute to the production of a higher quality of life.
In terms of the 'soft' benefits associated with becoming educated, an individual is apt to gain confidence, self-respect, and insights into subjects which lead to the formation of core values and beliefs.

Overall, an education provides individuals with both concrete and intangible benefits both of which serve to complement their lives in a range of remarkable ways.
About the Author

Tristan Andrews is a freelance author who writes for a tutoring and educational resources.