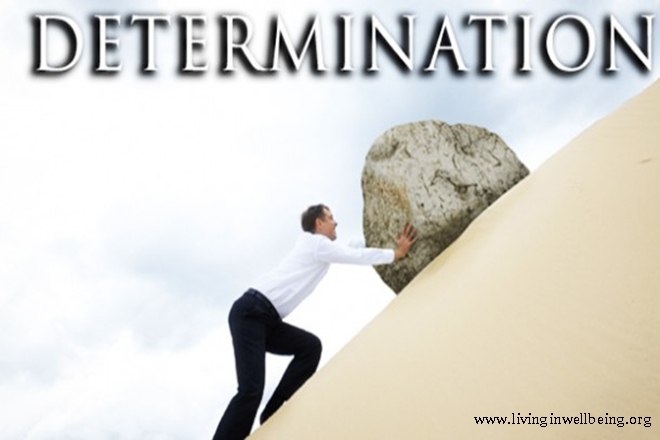 Most of us are familiar with the film Rocky starring Sylvester Stallone but the story behind the film is not so well known. It is one of the most edifying examples of the power of determination that you could ever come across.

Inspired by a fight between Muhammad Ali, champion of the world, and Chuck Wepner, a guy who never stood a chance against Ali, Stallone decided to write the scrip for a movie. Stallone, dead broke at the time, wrote the entire script in twenty-six hours using a Bic pen. As he wrote the script he decided that, no matter what, he would be the one who would play the leading role in the movie.

At a time when he did not know where his next meal would be coming from, Stallone was offered up to $325,000 for the script so long as he agreed to not star in it. The producers wanted Ryan O'Neil to be the leading actor. Stallone refused. He would be Rocky or the film would not be made. It was finally agreed that he could have the part but they would only pay him $35,000.

When Stallone refused the offer of over three hundred thousand dollars he was so broke that he had to sell his dog, Butkus, for $15.00 because he could no longer afford to feed him. He loved that dog so much that upon receiving the $35,000 for the script, he bought it back for $15,000. It says something about the character of the man.

The rest is history. The film was made for one million dollars, made $117,200,000 and won three Oscars, including Best Picture. Stallone became a huge star and arguably an American icon. All of that because of an infallible determination.

If determination is so important, how then can we inspire ourselves to get it? There are two different techniques that can be used. They are, the compelling future technique and the pain/pleasure principle.

The compelling future technique consists of vividly creating in our mind the kind of future that we would have if our dream ever came through. We must be able to know how it would really feel to actually live that dream. That is what great achievers do. Even before the first step is taken to turn their dream into reality, they know what it will feel like when it is completed. If the desire to live that projected reality is great enough, nothing will stand in the way of its achievement.

The aphorism, "No pain, no gain." takes on its full signification when it comes to great achievements. The effort required to turn a dream into reality is directly proportional to the scope of the dream. Wishful thinking never accomplished anything.

With enough determination, no mountain is too high and no dragon is too fierce. It is the human element that no force can resist.