Home / All Featured Articles & Blogs / Why Carbohydrates Are Important ? 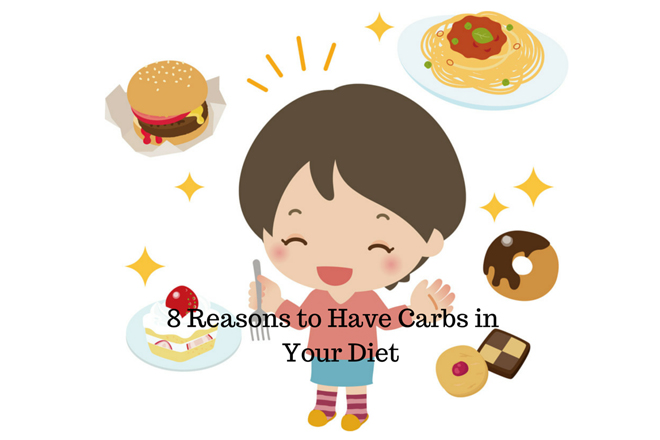 Carbohydrates are often looked down upon in the world of healthy eating. They are seen as fattening, lacking important nutrients and just all around unhealthy. But, what if we told you that carbs are not only a good thing to have in your diet, but are also necessary for the human body to function? They serve as the primary source of energy for most people, eclipsing the old standbys of meat and veggies. Today, we'll be looking at eight reasons why you should eat carbs, and how they can be beneficial to one's body. As always, try to keep a balanced diet and watch what you eat. As the old saying goes, too much of anything is not good for you. Get your nutritious protein bars out – these are the ways that carbohydrates can help, rather than hinder.

1. Energy and Focus
Carbs are vital in keeping up one's energy throughout the day. In fact, in a recent study conducted by Harvard University, it was found that high-carb diets were the majority rule. Out of 322 dieters, 90% had stuck to a diet of carbs for more than two years. Conversely, only 78% stuck with a low-carb diet for more than two years. The results prove that people generally like to eat carbohydrates, and while some intake a little too many, the right balance can keep you energized and ready to go throughout the whole day. Why, they're the best thing since sliced bread!

2. Protection Against Diseases
Eating healthy carbs can be an excellent way of preventing the onset of kidney disease, a condition that can be caused with high-protein diets. They can also prevent constipation, noted by the National Institute of Digestive Diseases to be a usual occurrence in a low-carb diet. This is because fiber, which acts as the body's cleaner, is a carb itself. Eliminating carbs from one's diet also reduces fiber intake, which can lead to digestive issues such as constipation. Carbohydrates help regulate cholesterol in the body, balancing out the number of animal products (i.e. steak, chicken) one may consume.

3. Reduces Weight and Speeds Up Metabolism
Heads up: a very scientific explanation is coming your way. A type of fiber, called resistant starch, is an invaluable carbohydrate in the human body. As the starch moves through one's digestive system, it creates numerous fatty acids, which help to burn excess fat, contrary to their name. This process preserves the body's muscle mass, which in turn increases metabolism, a very helpful tool in losing weight. Not eating carbs may cause a loss in muscle mass, decreasing metabolism as well.

4. Lessens Appetite
Carbs are powerful when it comes to suppressing one's appetite. They can fill you up quicker than other foods because they take longer to digest. This creates the sensation of “fullness” in your brain, relaying signals to the stomach so your hunger can be sated. Feeling full can help when on diets, so as not to eat excess food and thus increase the possibility of weight gain. In this way, carbs are useful both when starting a meal and ending it.

5. Lower Blood Pressure
High blood pressure is a common ailment among people today, with stress, anxiety and poor eating habits all contributing. Well, fear not, because carbs are here to save the day. A recent study, published in The American Journal of Clinical Nutrition found that eating whole grains could reduce the chances of a stroke by 25%. The same study showed that coronary artery disease would be lowered 15%. Both of these conditions would be caused by high blood pressure, but eating carbs like the ones which can be found in nutritious protein bars lowers blood pressure as well as the chance of a related stroke or disease.

6. Controls Blood Sugar and Diabetes
Eating a balanced diet with the right amount of carbohydrates is a tried and true way to prevent diabetes. High blood sugar is one of the factors in developing diabetes, where the pancreas cannot produce enough insulin for the body. Once again, resistant starch helps in this case, as the fiber is able to regulate blood sugar and prevent it from increasing.

7. Improves Memory in Older Adults
Get ready for another sciencey explanation. A study at the University of Toronto, conducted by Dr. Carol Greenwood, tested this hypothesis out on two groups of senior citizens. The first group received a bowl of cereal and milk, while the second were only given water. Twenty minutes later, the first batch were able to remember more details about their breakfast – 25% more, to be exact. This proves that carbs can be a great tool for memory in old age, as their nutrients can be a great stimulant.

8. Boosts Stress Reducing Chemicals in the Brain
Connecting with lower blood pressure up above, carbs can also reduce the stress on a person, activating certain chemicals in the brain. To study this, a test was devised by Dr. Grant Brink worth, an Australian researcher. About 106 dieters were followed for a year, with one half eating a diet rich in carbohydrates, and the other going on a low-carb diet. When the year was up, the first half reported feeling happier and calmer, whereas the second group felt anxious and stressed out.

Hopefully, this has given you some perspective on the positive attributes of carbs. Not everything's so black and white in the food world, but a balanced diet is still important. Eating carbs can help you maintain that balance, while also providing tasty treats to eat. So, with our endorsement, get out there and start munching down on some burgers and cake! But make sure you eat some greens or protein after.

Posted on June 15, 2015 by Dr.Purushothaman Kollam in All Featured Articles & Blogs, All General Blogs & Articles, All Guest Articles & Blogs, Health & Lifestyle Changing, Healthy Living Tips for All, Wellness & Wellbeing for All