Home / Self-Improvement Tips / TOP TEN REASONS NOT TO BE ASSERTIVE 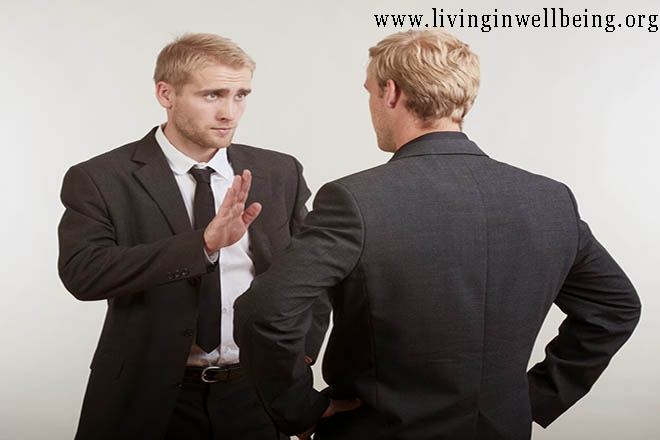 TOP TEN REASONS NOT TO BE ASSERTIVE
In my outpatient practice in psychology, I hear lots and
lots of reasons for not being assertive. I've defined and
written about assertiveness extensively in my ebook on
The Five Steps of Assertiveness, but in this article I want
to focus more on why people are not assertive. We all know
it is a skill that facilitates effective communication, reduces
intrapersonal anxiety and increases ones self-esteem.
It also contributes to reducing depression. I am not trying to
sell the idea of being assertive, because in my mind,
the idea is self-evident. But many people do not share my view.
Instead, a lot of people think assertiveness is a bad thing
and therefore avoid it. Here are the most common reasons why,
not necessarily in any particular order.
1) I am afraid people will get mad at me. This is
the fear of reprisal. The thinking goes something like this,
"If I'm assertive this person will get mad." Of course,
when someone is mad, all kinds of bad things are likely to
happen, so, do not make people mad. The assumption is is
that assertiveness makes people mad, not that I make people
mad. Wrong.
2) Bad things will happen to others. The thinking is
that if I'm assertive, others will fall apart or even do
themselves in. This is about guilt--yours not theirs.
3) People won't like me. "If I speak up, I'm bugging
people. It's nagging. It's better to shut up." Nagging is
irritating because it is not very direct. It is more akin to
passive aggressiveness, so yes, it will cause others to
dislike us. However, assuming people will think negatively
of us and that we'll be ostracized for speaking up is incorrect.
In this case passive aggressiveness is the culprit, not
assertiveness.
4) I talk too much already, so why not just be quiet?
Saying a lot doesn't mean we are assertive, nor does saying
little mean we are non-assertive, or worse, passive.
Quantity of speech has little to do with quality, i.e.,
whether it is assertive or not.
5) If you do not have anything nice to say, do not say
anything at all. This is the voice of your parents who
probably weren't too assertive? Who says being assertive
is just about saying not nice things? Oh, by the way, if we
must say something negative, assertiveness is THE tool that
best expresses this. Try saying something negative with an
aggressive tinge and see what happens. If we are assertive,
"things" don't build up to be negative, or at least we can
catch "things" sooner and deal better with them assertively.
6) It is no big deal. This is minimization, avoidance,
intellectualization, rationalization and/or suppression.
It is what we do when we don't want do deal with something,
so suddenly it's not important.
7) It is stupid. I don't need to be assertive because I
already get what I want now. For most of this article, I've
been writing for people who are not assertive who want or
need to be. These people need to power up or at least refine
their communication. Point seven is for people who are
aggressive and need to power down. These are the bullies or
immature types who don't care about others, just as long as they
get their way. Impulsive types sometimes fall into this category.
It is important to get enough control over ourselves to try
different, assertive vs. aggressive ways of relating to others.
And, just because you are getting what you want now does not mean
you are doing so in a good way.
8) People should know what I think or what I want.
More often than not, they don't. People are not psychic.
We have to spell things out for most people, usually verbally,
preferably directly. Expecting others to know what we think
or want is a recipe for disaster. At the very least we are
setting ourselves up for frustration. It irritates others
because it is narcissistic.
In my ebook I next write about "deeper stuff," which
touches on self-esteem, being independent of others, thinking
for yourself vs. pleasing others, etc. These are numbers 9)
and 10).
For more in-depth information and a discussion of all the
ins and outs of being assertive, read my publication.
-Dr. Griggs
http://www.psychologyproductsandservices.com/page3.html
About the Author