Home / All Featured Articles & Blogs / Rape! Is It A Recent Addiction In India? 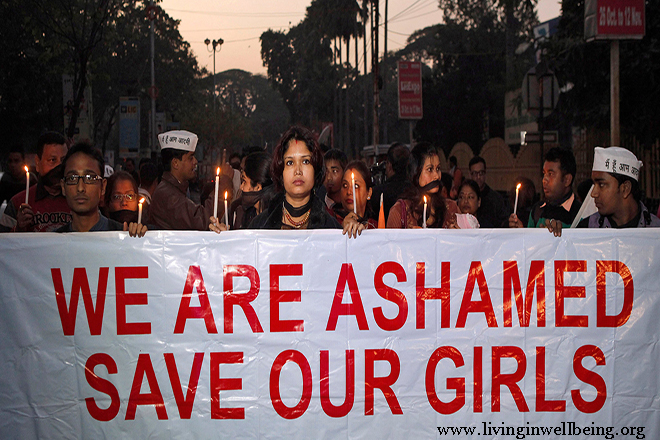 I toss around in bed, trying to dodge the piercing sun. It feels like someone is pounding my head with a hammer. The stench of last night’s rum and vomit hit me. I feel like puking. Getting up, I go wash the vomit caked in my beard. My bloodshot eyes stare back at me. I walk to the verandah, where Munni brings me tea. She’s a tad too hot for a servant girl. As she gives me the glass, she adjusts her dupatta. Has she caught me checking her out?

Ammi made my favorite for breakfast today.. mooli paratha. I finished mine and snatched Diya's too. Women can do without pampering.

I walk to the construction site, with the hammering still going on inside my head. This bitch walking in front of me is so slow that I want to push her out of my way. But her ass is swaying so perfectly, that I just gratify myself with enjoying the view.

The long and tiring day is finally coming to an end. By the time I leave the site, it’s dark. If the scorching sun and dust are not punishment enough, our boss, Sabina the engineer added to it.She thinks she can lord over me because of her fancy degree. She actually had the nerve to shout at me in front of my laborers.If I had my way I would teach her who the real boss is. The bus stop on the way is particularly deserted today, except for this girl. She must be working in that big techie building, the blue tag on her chest told me. What is she doing here at this hour? Waiting for some fun to come her way? The jeans hugging her thighs remind me how tight her skin would be. As if disquieted by my stare, she starts walking quickly down the dark road, leaving the lighted bus stop behind. The urgency in her walk, the palpable fear… I imagined the sweat drops breaking on her forehead. I quicken my steps and close in on her…

What pushes Indian men over the edge? Is it really short skirts and tight blouses like our ministers claim? Are women really crossing the limits?

Lately, some politicians have given me more tickles than Mr. Bean. “I warn my opponents, I will ask my boys to go there. They will rape their women”, which turned out to be “I said we will raid, but because there was so much noise people thought I said rape”, said the actor-turned-politician.

We shun western culture, their clothing, and even the freedom women enjoy there. It does not fit here, they say, probably because Indian women are too dumb to choose how they want to live. Or maybe our women are too precious, and need to be protected, not let loose.

Unlike in the western world, here in India opening a door for a woman or offering her a seat is considered the ultimate threat to your manhood. A woman does not deserve respect if she is not your mother or sister. And if she happens to be one of these, then the cocoon of over protectiveness would choke her to death. It goes to such limits, that you wonder if women here are not thinking, breathing souls. The possibility of a woman taking care of herself is so remote, that it’s considered a big fat joke.

Levi Strauss would die a thousand deaths over if he comes to know he invented the root cause of most rapes in India. Well, if provocative clothing was enough to amuse your amygdala, then women would be pulling down every guy’s low waist pants.

Every girl in our country has to live a life of constant fear. And that is why we sneak up to sham doctors and kill our girl babies even before they are born. Why put them through all this torture?

Women in short skirts, women who walk alone and women who go out in the dark are gluttons for punishment. So let’s rape them all! But hey, we have our moral police to take care of that. They would gladly ‘teach’ our girls how to behave. I guess there are too many girls out of line, that they don’t get enough time to give ‘lessons’ to rapists. Or are the lazy media people not reporting rapist-beatings by the moral police? The media too, probably need a ‘lesson’ from them.

For foreigners who come in search of the Indian soul and culture, we have more than ‘athithi devo bhava’ to offer. Gang rapes and assaults are just a few in the itinerary.

Not just sexual, we’re way good at verbal rape too. If you don’t trust me, ask Maria Sharapova. Thanks to our herd-like-nature, we Indians would watch for the first sheep’s reaction and follow through. One person abused her, and the rest of them were only too glad to join. Another then musters up the courage to point out the wrong, and half of the herd would jump to the new side. The other half would still stick on to herd-leader no.1

It is this same herd-nature that pushes some men to put women at fault. Or tell me another crime where the victim becomes the accused. I wonder if they’d also say the Jews provoked Hitler.

It’s not that we don’t learn from mistakes (“After all, boys are boys. They make mistakes”). We just keep on doing the mistake over and over.

Nirbhaya has generously given us a gazillion facebook posters and black-dot-profile-pictures. She has managed to put up quite a few pink ‘women-friendly-auto’ stickers. She has licensed a rally of overpriced, she-taxis. And a joke-book full of political comments. She has also given us a topic to write and write and write again and tire the readers with.

But the string of rapes and killings that followed, speaks a different language. They don’t reflect animal needs or violence from sex-deprived men. It is a challenge these men pose, to the country…a challenge for all of us...

‘Yes, we will rape, and we will hang women from trees. What can you do?’