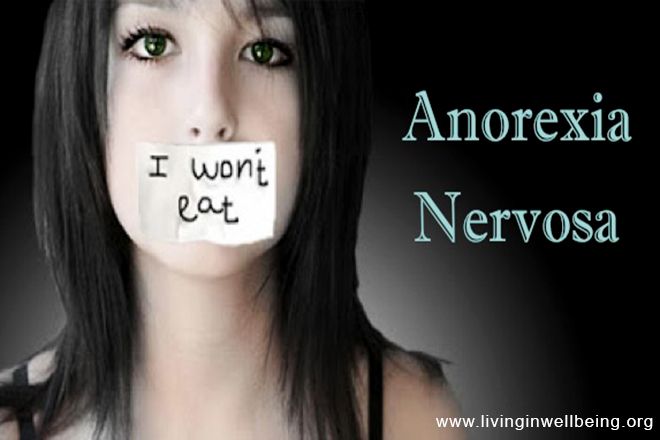 Anorexia nervosa is an eating disorder. This eating disorder can make the body lose weight severely. Those who are affected with Anorexia Nervosa have the fear that they might gain weight. When they find that they have lost a few pounds, they feel better. Such people make sure to skip their meals or eat less amount of food that normal amount. Moreover, they exercise abnormally. Some of the causes of Anorexia Nervosa are due to the environment we live in, biological reasons and psychological reasons. The benefits of eating healthy should never be ignored.

The world we live in is very obsessed with a slim and trim body. Such a pressure from the society from the visual media like television, commercials and magazines give people the image that being slim is the right thing to achieve. This makes a lot of people develop anorexia nervosa later in life.

People who have obsessive compulsory disorder tend to suffer from Anorexia Nervosa. Such people have a tendency to do things in perfection. This habit of theirs makes them think that they are the perfect ones and not so thin ones.

Anemia can be called the major risk caused by Anorexia Nervosa. With anemia, the count of the red blood cells becomes lesser. The right supply of oxygen to the various parts of the body is not provided henceforth. Making your body thin and unhealthy could only lead to a lot of other problems. Being anemic can be really dangerous as the blood which is rich with oxygen provides the body with the right nutrients like iron, folic acid and vitamin B12. Eat healthier to avoid anemia and anorexia nervosa.

Anorexia Nervosa causes the decrease in the cognitive function of the body. The brain takes in only around 20% of the calorie intake from the food. As the brain is in need of a good supply of glucose from the blood for its daily functioning, we need to consume the right amount of food every day. Eating less will not be a good thing to do henceforth. This will also result in the decline of the cognitive function, making it difficult to focus on your day to day activities.

Osteoporosis can be affected by a person in future if he/she has Anorexia Nervosa. This is a disease where you tend to lose the density of the bone. The ultimate result will be that the bones become extremely fragile and result in fractures. When you are having Anorexia Nervosa, you will not be consuming the right amount of nutrients for the body, especially calcium, magnesium and phosphorus. These help to strengthen the bones. When the body does not get all these nutrients, it affects the density of the bones that will pave way for osteoporosis.

Another health risk of Anorexia Nervosa is that it will decline the cognitive function resulting in loss of memory. You will tend to forget things and will experience a lot of problem as a result. Lack of intake of proper food will lead to Anemia and this can result in serious problems. Such a stage will lower the level of the red blood cells. The blood with oxygen supply to the brain, which will have a low amount of oxygen, will not be sufficient for the brain. And hence you will have problems related to remembering things.

Apart from those health risks mentioned as a result of Anorexia Nervosa, you will find that you can be affected by Amenorrhea, infertility, erectile dysfunction, abnormal rate of heart, fainting, weakness, low blood pressure, swelling and insomnia, low blood pressure and kidney failure due to the same. Eating healthy is the only option that you need to follow every day for preventing it.