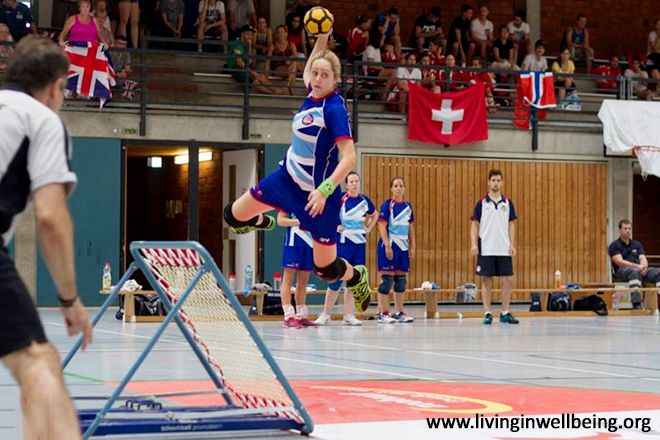 Tchoukball is an indoor sports game which is conducted on a 40 x 20 meter rectangular field. Like football and basketball, it has two teams. Each team has 9 players each. The ball has to be bounced to the rebound frame that is placed at the end of the field, for securing a score. We also can find a half circle which is the forbidden area that is found in the front of the bounce frame. We can find various sizes for the Tchoukballs, according to the age group of the Tchoukball players taking part in it.

In this sport, the ball should not touch the ground when it is held in the hands of one of the players of the team. At this point, the players of the opponent team are not allowed to interfere so as to prevent violent physical contact or any kind of aggression. As soon as the ball is thrown to the rebound frame, the other team members can take hold of the ball. We find a lot of benefits of playing this game. Some of them are described below:

The game of Tchoukball can help you build you your muscle mass, particularly those in the legs, hands and arms. The game involves activities such as running and jumping for the purpose of delivering the ball. This will build as well as strengthen the muscles of the legs. Apart from this, you need to pass the ball to other members of your team and throw the ball right into the bounce frame with great force. In this way you can build the muscles of your arms and hands.

Calorie burning is possible when you take up the game of Tchoukball game. There are a lot of activities involved in this game like running, jumping and walking, which will make your body sweat a lot.

Endurance is what is needed while playing Tchoukball. Walking and running along the field for a lot of times will make your body develop stamina.

Helps in increasing the coordination between eye and hand

While throwing the ball and passing it to the team players, you will be able to increase the coordination between your eyes and hands. A good coordination is needed to play the game and while shooting the ball to the bouncing frame.

Endurance is developed as a result of playing the game of Tchoukball. You need to run all through the game and this will help in increasing your breathing. If you are able to breathe properly, you will be able to increase the launch capacity. Thus, you will gain more endurance for playing the game as well for doing other activities.

There are further more benefits that you will gain while playing Tchoukball. Playing the game will increase your alertness, improves your mental health, increases concentration, improves the functioning of the brain, builds up competitive spirit, teaches you the importance of teamwork and also helps in developing social interaction. Tchoukball lesson plans help you to develop a lot more skills in you and help you to develop a positive attitude in life.