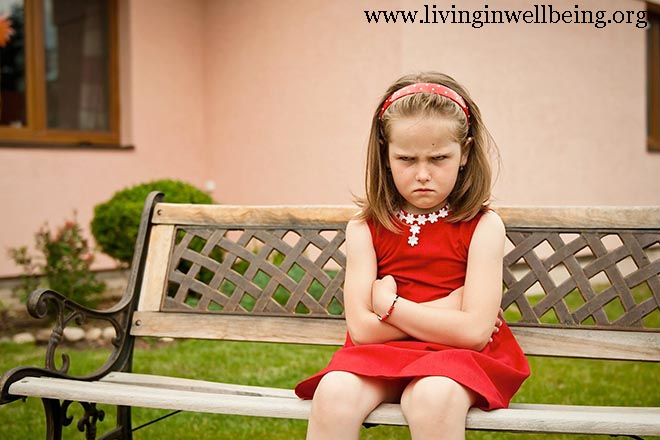 Childhood and adolescent depression increased dramatically in the past forty to fifty years. The average age of onset has fallen. During childhood the number of boys and girls affected are almost equal. In adolescence, twice as many girls as boys are diagnosed. (Similar to adult rate) Repeated episodes of depression can take a great toll on a young mind. Well over half of depressed adolescents have a recurrence within seven years. Children with Major Depression have an increased incidence of Bipolar Disorder and recurrent Major Depression.

Characteristics of child and adolescent depression

One might observe the following external signs in a depressed child or adolescent.

Preschool or young elementary age: The child might look serious or vaguely sick. He might be less bouncy or spontaneous. While other children would become tearful or irritable when frustrated, this child may show these states spontaneously. He may say negative things about himself and may be self-destructive.
Older elementary school through adolescence: The adolescent may present with academic decline, disruptive behavior, and problems with friends. Sometimes one can also see aggressive behavior, irritability and suicidal talk. The parent may say that the adolescent hates himself and everything else.
Causes of Depression

How much is due to heredity and how much to environmental issues? Things associated with childhood depression include inconsistent parenting, stressful life experiences, and a negative way of viewing the world. Childhood depression is also associated with a family history of mood disorders and with the existence of other psychiatric conditions If the relative has had childhood or recurrent depression, the child is at even higher risk of developing depression. There are different theories on the causes of depression. Some feel that children inherit a predisposition to depression and anxiety but that environmental triggers are necessary to elicit the first episode of Major Depression.

When depressed adults are asked about their childhood experiences, they are more likely to report neglect, abuse rejection and parental conflict.

Many children with depression have one or more other major psychiatric diagnoses. Anxiety Disorder, Substance Abuse, and ADHD are frequently associated with childhood depression. ADHD might be present before the first episode of depression and can complicate the treatment of both conditions. Substance abuse often starts after the first episode of depression, although this can vary in different individuals. The other conditions may persist even after the major depressive episode passes, and can render the individual more vulnerable to a recurrent depression. Children with depression accompanied by ADHD or Conduct Disorder are more likely to have adult criminal records and suicide attempts than individuals with depression alone.

Depression can lead to an increased chance of suicide attempts and successful suicides. Since 1950, the adolescent suicide rate has risen four fold 12% of the total adolescent mortality in 1993 was due to suicide. Suicide is not always associated with MDD. Usually those who attempt suicide have more than one problem. One should be especially vigilant with those who have a relative who committed suicide or who are exposed to family violence.

Depressed children often have depressed or stressed parents. Can the stress of coping with a depressed child lead to parental rejection or is it the poor parenting that leads to the child's depression? The answer may be different in different cases. A depressed, hyperactive child may be hard to raise. Some parents have more coping skills than others. A child may learn to give up because parents have not modeled good ways of coping with stressful situations.. Some suggest that parental patterns of irritability, and withdrawal lead to low self-esteem in the child and that this predisposes the child to depression. Some suggest that a genetically vulnerable child is more likely to develop depression when exposed to family stress.

It usually takes more time to diagnose Major Depression in a child than it does to diagnose an adult. The diagnostic process should include interviews of parents and the child. I try to include both parents, even if the child is only living with one parent. Parents are more likely to report outward signs of depression. The child may be more aware of inward signs. Sometimes a parent's report is skewed by the parent's own agenda, so school and other outside reports are useful. (with written permission) Generally, there should be a recent physical. Although this is usually done by the primary care physician, the psychiatrist may do a screening neurological and relevant parts of a physical exam. The psychiatrist will ask about the developmental history and about the existence of other psychiatric conditions.

There is no cookbook technique. Treatment must be tailored to the needs and schedule of the child and his family. Generally, with mild to moderate depression, one first tries psychotherapy and then adds an antidepressant if the therapy has not produced enough improvement. If it is a severe depression, or there is serious acting out, one may start medication at the beginning of the treatment.

A variety of psychotherapeutic techniques have been shown to be effective. There is some suggestion that cognitive-behavioral therapy may work faster. Cognitive therapy helps the individual examine and correct negative thought patterns and erroneous negative assumptions about himself. Behaviorally, it encourages the individual to use positive coping behaviors instead of giving up or avoiding situations. After therapy is over, children may benefit from scheduled or "as-needed" booster sessions.

Most studies suggest that the older, tricyclic antidepressant medications (Amitryptiline, Imipramine Desipramine) are no better than placebo in the treatment of depression. Still, many of us have seen individual children and adolescents who have responded well. Tricyclic antidepressants can be an effective treatment for ADHD. Since there is a small risk of heart rhythm changes, in children on these medications, we usually follow EKGs. The usefulness of blood tricyclic levels is being debated.

SSRIs (Selective Serotonin Reuptake Inhibitors--Prozac, Zoloft etc.) have brightened the outlook for the medication treatment of child and adolescent depression. The side effects are not as annoying as those of the older medications. These medications are somewhat less toxic in overdosage. Fluoxetine (Prozac) has been approved by the FDA for the treatment of depression in children 8 and up. There is special concern about using paroxetine (Paxil) or venlafzxine (Effexor) with depressed children and adolescents. As compared to adults, adolescents are a bit more likely to become agitated or to develop a mania while they are taking an SSRI. These medications can decrease libido in both adolescents and adult. I warn parents about the symptoms of mania, especially if there is a family history of Bipolar Disorder. If the child has had a manic episode in the past, one might want to consider a mood stabilizer such as Lithium, or Depakote.

Some individuals have only one episode of depression, but often depression becomes a recurrent condition. Thus, one should educate the child and family about the early warning symptoms of depression so that they can get right back in to the doctor. It is also useful to discuss the child's particular "early warning signs" with the primary care doctor. Sometimes I schedule booster sessions in advance and other times, leave the door open for the child or family to schedule one or two sessions.

The decision about when to stop antidepressant medication can be complex. If the depressive episodes are recurrent or severe, one may consider longer term maintenance pharmacotherapy. If the depression was milder, the family wishes the child to be off medications, or there are side effects, one may consider stopping the medication several months or a year after the symptoms are gone. If there have been several recurrences, one might then talk to the patient and family about longer term maintenance. Exercise, a balanced diet (at least three meals per day) and a regular sleep schedule are desirable. If there is a seasonal component, a light box or light visor may be helpful.

If there are residual social skills problems, a social skills group through the school or other agency can help. Scouts and church youth groups can be enormously helpful. If parents and child consent, I will sometimes involve a scout leader or clergy.

One must treat comorbid psychiatric disorders such as anxiety and ADHD. Since a young person who has had a depression is more vulnerable to drug abuse, one should start out early with preventative measures. The primary care doctor can be a partner in monitoring for relapse, substance abuse and social skills problems during and after the psychiatric treatment.