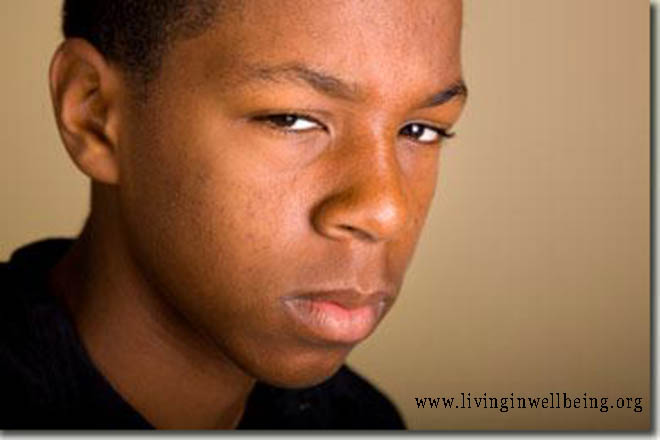 “Adolescence may be defined as a period within the life span when most of the person’s physical, psychological and social characteristics are in a state of transition from what they were in childhood to what they will be in adulthood. Simply stated, adolescence is a period of life characterised by several major changes that bring the person from childhood to adulthood” (Lerner & Galanbos, 1984 p.8).
The psychosocial theory of development as set out by Erikson proceeds by stages. The first four occur during infancy and childhood, the fifth stage during adolescence and the last three stages during the adult years ( Erikson, 1963). The fifth stage is called Identity versus Identity Confusion. With a newly emerging cognitive structure the adolescent can think about thinking. The questions become “who am I ?” and “where am I going ?”. A sense of identity emerges; a feeling that one is a unique human being, with likes, dislikes, goals and some control of one’s own destiny.
The adolescent may suffer more deeply than at any other time in life from confusion of roles, or Identity confusion. The adolescent may feel the expectation from others to make important decisions yet be unable to do so. Being rebellious, self-conscious or retreating to childishness are characteristic of this time. Parents and teachers may view the identity crisis of the adolescent as dangerous, the whole future of the individual and the next generation seeming to depend on it.
The virtue of Fidelity develops at this stage. The adolescent is sexually mature, yet not adequately prepared for parenthood. There is the added pressure to assimilate into an adult pattern of life. According to this theory of development, the adolescent seeks an inner knowledge or understanding of his or herself and attempts to formulate a set of values. Fidelity is seen as the ability to sustain loyalties in spite of the inevitable contradictions of value systems. Fidelity is acquired through the confirmation of ideologies and truths and through the affirmation of peers.
The importance of moral development has been referred to by both Piaget and Kohlberg (cited in Cameron and Rychlak, 1985). Both emphasize that early in life children take a very literal view of what is right and wrong, obeying rules without grasping the fundamental reason for them. Moral growth is thought to develop from exposure to moral reasoning that is moderately higher than the person’s current level. Sensing a cognitive conflict or contradiction, the child is challenged to find a solution and make sense of the moral dilemma. These experiences help build a sense of personal mastery and develop a sense of mature judgment in ethical and moral matters.
The values that adolescents affirm in their lives are fundamental to their eventual psychological adjustment. Freud (cited in Rappoport, 1972) saw the tendency to moralize, to evaluate and to judge the behaviour of self and others as a particularly human tendency. For this to give some conclusion there must be a frame of reference. The answers to questions surrounding issues related to sexual responsibility depend upon this frame of reference.
Freud’s ideas about genital sexuality illustrate the need to educate adolescents not only in terms of the physical mechanics but also in relation to the psychological and social meaning attached to the act of sexual intercourse. The adolescent with sexual desires that produce high tension and with the need for gratification so great, may romanticize sex because it is so pleasurable. Anything so wonderful must be love.
In terms of the interpersonal or social character of intercourse, there is giving as well as receiving pleasure. The greater the partner is loved and the more pleasure this partner receives, the greater will be the strengthening of the self-concept (Rappoport, 1972). As a social act, intercourse provides benefits in the giving. This means that if an individual uses sex as a means of controlling or manipulating then they do not meet Freud’s idea of meaningful genital sexuality. Personality development can only be attained when individuals give of themselves in genital sex as fully and honestly as possible. It is only then that they truly affirm themselves in the relationship.
Communicating Values

^TOP
According to Moore and Rosenthal (1993) adolescents who do not accept the traditional moral stance of sexual abstinence may feel as if there are no clear values associated with sexual activity. Society gives conflicting messages through the media, the power balance in sexual relations and parents’ own confusion on the issue. The adolescent is often discouraged from talking about sexual values yet this discourse can be seen as an attempt to fill this void.
Parents are still regarded as the primary social influence on their children. From birth, children observe and learn from their parents’ behaviour and the way parents answer questions and discuss issues related to sexuality. Even avoiding the subject altogether conveys values. The absence of sexuality education by parents is actually an educative process that portrays sex as negative and taboo rather than as a natural part of responsible human behaviour.
Parents can influence adolescent attitudes through their own attitude to sexual behaviour. Sometimes what is modeled by parents is what is most influential. Another indirect way that parents influence their children’s sexual behaviour is through the teaching of coping strategies and the encouragement of personality traits such as the ability to delay gratification, inhibiting aggression and developing a sense of responsibility.
The Classroom

^TOP
The liberalization in premarital sexual activity, the availability and promotion of contraception and the liberalization of abortion, plus the emphasis on personalized religious views, reflect a trend towards personal decisions and personal values rather than traditional institutions. This trend can leave the adolescent in a support vacuum at a critical time of development that requires guidance in order to form a reasoned and socially responsible basis for personal decisions and values.
Anxiety associated with the adolescent’s propensity for risk-taking and the vulnerability of this particular time in life can lead both parents and teachers to try to find an approach that is simple, information based and easy to administer. However, the developmental needs associated with adolescence and the appropriateness of educational resources need to be considered. The growth of concern over the spread of HIV/AIDS in the mid-80s led to policy development that was based on a Harm Minimisation approach (Single, 1995). However, the aim of this approach is not to address the social meaning of sexual behaviour. In fact there is a deliberate absence of judgement or consideration concerning the social implications of sexual activity apart from the spread of disease. The harm minimisation approach only addresses physical disease as a harmful consequence of sexual activity, hence the promotion of condom availability and use. Condoms are readily available and accepted as a form of contraception and protection against some sexually transmitted diseases, yet research has found that the emotional and social aspects surrounding sex often prohibit or reduce the proposed effectiveness of the condom (Australian Research Centre in Sex, Health and Society, 2000).
The harm minimisation approach is promoted as acting in a socially responsible way, however the social meaning, value and responsibility surrounding sexual activity in its entirety is not considered. One of the fundamental weaknesses of this strategy is that it is divorced from the underlying values that may prompt the development of a comprehensive set of socially responsible attitudes and behaviour. Another weakness is that when presented as a health promoting strategy for the classroom it targets all adolescents. It sets up the expectation that all teenagers are sexually active and has the potential for communicating a message condoning sexual activity without addressing the social and moral consequences.
More and more students are looking to teachers for guidance. In the national Rural Mural research (Hillier, Warr & Haste, 1996) it was found that students are in fact looking to teachers to provide them with more information on the sociocultural aspects of sex. Boys nominated a need for more discussion around values about sex, whilst girls were keen to obtain more information on developing skills to resist the pressure to have sex. If guidance and support is what is needed in such situations then Harm Minimisation may not be the ideal starting point. In presenting a ‘safe sex’ message, a harm minimisation strategy may be inadequate.
A neutral stance in terms of values through, for example, a values clarification teaching strategy may also fail to address developmental needs. This strategy assumes that the adolescent already has set values that only need exploration and clarification. However, this is far from the developmental stage of the adolescent when values are in the process of being formed and integrated, contributing to a stable sense of identity. Values need to be presented to the adolescent in a concrete form, validated and affirmed yet also open to questioning in a safe environment. Here the experience of the teacher needs to be considered. Teachers may have been taught that challenging a student’s expressed values is intrusive, directive or unprofessional (Boxer et al, 1989). Similarly, teachers may feel barred from the expression of their own attitudes and values about sexual issues in the interests of appearing non-judgmental.
Boxer, Levison and Peterson (cited in Worell and Danner, 1989) suggest that frank, open and directive approaches may be more beneficial and motivating than a reserved approach. There is a need to teach adolescents about sexuality with an emphasis on communication and affective education rather than exclusively on biology and harm minimization or safe sex practices. This helps them to accept and integrate their sexuality in a positive manner.
The need for support and understanding from parents must not be underestimated when considering the kind of material that is addressed within the education program. There may be concerns that parents may respond to the contents of the education program in a negative way. Communication with parents with a rationale for the approach and contents of the program is important so that the teacher can freely and confidently explore value-laden issues.
Within the classroom, the development of a set of normative beliefs, values and expectations that encourage sexual responsibility (beyond the simplistic safe sex approach) is needed in order to motivate the adolescent to act accordingly. Reports indicate (Victorian Task Force Report, 1997) that adolescents need and desire an experience of the social and emotional aspects of human life such as a sense of belonging and that those with a value system centred on principles of beneficence, concern for others and care for the self are more likely to experience family harmony (Pearson and Love, 1999). Classroom developed values can become a means to a sense of identification with a group and a form of security through clear expectations and boundaries of behaviour.
The issue of values in sex education is a priority. There cannot be decision-making without some reference to ‘what is good’ and ‘what is not good’ in relation to this social act. Good decisions lead to success and effective coping (Joseph, 1994), providing the adolescent with a form of resilience against stress and inevitable failures. Programs that address this vital component are few, yet parents and teachers who recognize the significance and potential for the adolescent may find such resources in the programs and resources developed by Open Doors. These can be viewed in the Catalogue or in Student Programs.