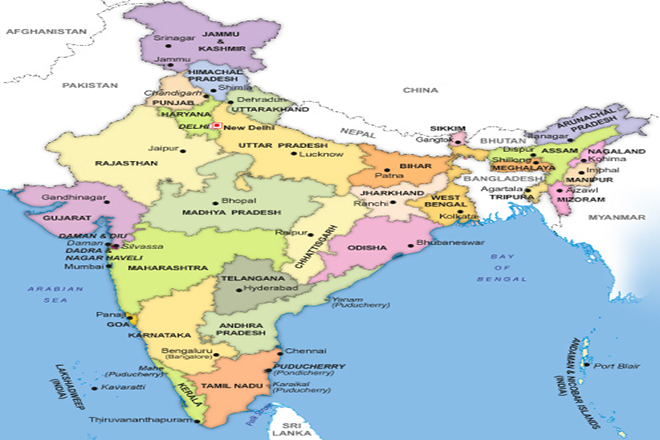 We are presenting 100 interesting facts about our nation.
Definitely these information will be helpful to everybody. Here you can find them.

Our Population - Over 1.2 Billion People

We have got 780 languages in use. Hindi is our national language

India has the largest Postal System in the world

India has the second largest railway network in this world

The Buddha visited Varanasi in B.C 500

Taj Mahal is one of the seven wonders of the world

India has over 1.9 million miles of roads, the world's largest road network

Chess was introduced to the world by India

India got independence Aug-15, 1947, which we celebrate every year

New Delhi is the capital of India

Diamonds were found officially only in India till the year 1986

On an average every Indian can speak more than two languages

The official recognized languages in India come to 22 in number.

India has the largest English speakers in the whole world

The number one textile exporter in the world is India

Two Miss Universe and five Miss World were from India

The average Indian age is younger than in other countries

India is a peace loving country, never attacked any countries

India is the largest movie maker in the world

The credit of invention of "Zero" goes to India

World famous scriptures, paintings, and ancient buildings can be found in India

The largest Montessori school in the world is in India. More than 26000 students studying there

The number 1 mango exporter in the world in India

The biggest bean producer in the world is India

The number one banana exporter in the world is India

India is the largest producer of natural milk in the world

Tea is the national drink of India. India produces more tea than any other country

The main food items of India are rice, wheat, and dhal

Indians are the largest users of vegetarian food in the world

Indians traditionally use their hands for eating food

The time zone of India is the same in all areas

The wettest raining spot on earth (425 Inches of rain every year) is at Chirapunji, India

The Himalayan mountains are in India

The most thickly populated river basin in the world is Ganga, India

The coastline on Indian land is about 4700 miles

The largest single block of tidal halophytic mangroves is in Sundarbans, India

12% of Indian land are forest area

In India there are 27 UNESCO sponsored heritage sites

The main climatic seasons in India are summer, winter, monsoon and post monsoon.

The most visited and wealthiest pilgrimage Temple in the world is Tirupathi, daily income comes to Rs. 3 crores.

The only temple in the world for Baha'i is in Delhi, India

Brihadesswara Temple is India's largest temple, where the statue of Nandi is carved in a single 13 foot rock and the 1000 year old

temple is made of granite

The highest cricket ground of the world is located in Himachal Pradesh, 2400 meters above the sea level

The peculiarity of the Indian flag is that it is tri colored. Saffron for courage & sacrifice, white for peace, truth and green for
Prosperity. The Ashoka Chakra in the middle of the flag is a peculiarity

Bengal tiger is the National Animal of India

Peacock is the National Bird of India

The only blind dolphin species in the world are Ganges River Dolphin, India

Lotus is the National Flower, which is very common all over India

India is the largest buyer of gold in the world

India is very receptive to all religions including Hinduism, Buddhism, Jainism, Sikhism, Christianity, Islam and the like

The game of Snakes & Ladders originated in India, a symbol of virtues v's Vices

Cricket is the most popular game. India gave birth to world famous cricketers like Sachin Tendulkar.

Hockey is the national game of India and has won many international gold medals.

The origin of the word "Navigation" came from India in connection with the first navigators made their journey in the Sindh river before 6000 years.

Sushrutha is the father of Indian surgery. In the Ayurvedic system of Sushruta Samhitha, surgeries were done 2600 years ago

According to Indian tradition white color is worn by people for funerals, in contrast to black colors in other countries

Holi is the festival of different colors celebrated by all persons

Yoga system originated in India, which is now popular all over the world

The only woman ruler of Mughal period was Raziya Sultana

Indian women are more in favor of ethnic dresses like Salwar Kameez and sari, but now the trend has changed to western style

Indian men like western clothing, but during festivals and special occasions they use local dresses.
- See more at: http://www.visionandviews.com/2012/01/our-approach-weare-trying-to.html#sthash.pQQHoPWd.dpuf

Posted on January 20, 2015 by Dr.Purushothaman Kollam in All General Blogs & Articles