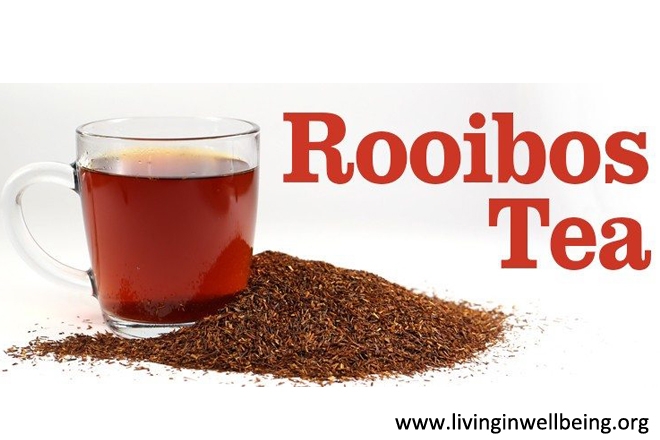 Healthy life is something that anyone loves to have. So as to follow such a life, one needs to follow certain healthy ways of life, such as consumption of good food, regular exercise and good thinking. Rooibos tea consumption is considered good for the health and is gaining popular among most of the people round the world.

Rooibos is mainly used for making herbal tea. This tea is popular as the South African Red Tea. The peculiarity of Rooibos tree is that it grows only in a small area in South Africa named Cederberg Region at Western Cape. The leaves get the reddish brown color only after fermenting it. The green Rooibos is also produced, that is leaves that have not undergone the oxidation process.

Polyphenols are found in plenty in Red Rooibos. This gives it an antioxidant property. Polyphenols also have certain qualities such as anti inflammation property, anti viral property and anti mutagenic properties. There are also other kinds of antioxidants in Red Rooibos such as quercetins, nothofagin and aspalatin. Antioxidants are very essential for the body, as it helps to prevent cancer and other kinds of diseases like heart diseases, dementia and Alzheimer. The immune system of the body is boosted with the help of antioxidants. Thus, the healing power of the body is made quicker and helps in preventing us from being sick.

Caffeine is not found in Red Rooibos tea. People suffering from insomnia are recommended to consume Red Rooibos tea. The quality of sleep can be improved with its consumption as it does not contain caffeine. Caffeine also gives us good mood, increases the blood pressure, which is a boon for those who suffer from hypertension. Most of the energy drinks contain caffeine. The continuous use of such drinks is not good for the health, and it can be addictive. A lot of people round the world are addicted to caffeine, but they do not have the slightest realization of this. Red Rooibos tea mixed with malt and milk can make a good substitute for ordinary energy drinks or even beverages. Usually athletes, travelers and kids with hyperactivity are recommended to drink plenty of beverages. Red Rooibos tea is usually recommended for them.

As a treatment for hypertension:

Red Rooibos tea has the property to reduce stress and this is the main role which makes it helps in maintaining the blood pressure. It has muscle relaxants in it, which plays the role of vasodilator, helping in reducing the blood pressure. Hypertension can ultimately lead to stiffening of the blood vessels, heart diseases as well as stroke, which are in common known as Atherosclerosis. This can be prevented with the regular consumption of the magical tea.

Helps in promoting the cardiovascular system:

Red Rooibos tea has quercetins in it, which helps in stopping any kind of cardiovascular disorders. Quercetin is anti-inflammatory in nature, and this helps in fighting free radicals and decreases blood pressure by absorbing HDL or the good cholesterol. It also prevents the LDL or bad cholesterol from sticking onto the blood vessels. Such activities help in preventing various cardiovascular diseases like heart problems, atherosclerosis as well as strokes.

Red Rooibos tea is a very good medicine that helps in curing colic or stomach pain in small children. South African mothers give Rooibos tea to soothe the colic of their children. It is also used to cure a lot of other diseases too.

This wonder tea has the ability to prevent diarrhea. It also helps in soothing abdominal pain as well stomach cramps as it has antispasmodic properties.

Is a good treatment for diabetes:

The tea is a rich source of aspalathin, which is an antioxidant that helps to balance the blood sugar. It helps to boost up the absorption of glucose by the muscles, increases the production of insulin as well as secretion by the pancreas, stopping insulin resistance. This helps in preventing Type 2 Diabetes. With these activities taking place inside the body, diabetic patients will not have a blood sugar level drop or spikes.

Some other benefits of Red Rooibos Tea

Red Rooibos tea is safe for people suffering from kidney stones, it is good for the treatment of allergies, and it helps in promoting a healthy skin and prevents premature aging. The tea is extremely powerful. Even though it has a lot of benefits, it can also react to a lot of treatments such as chemotherapy. Those with kidney or liver diseases should not consume this tea.