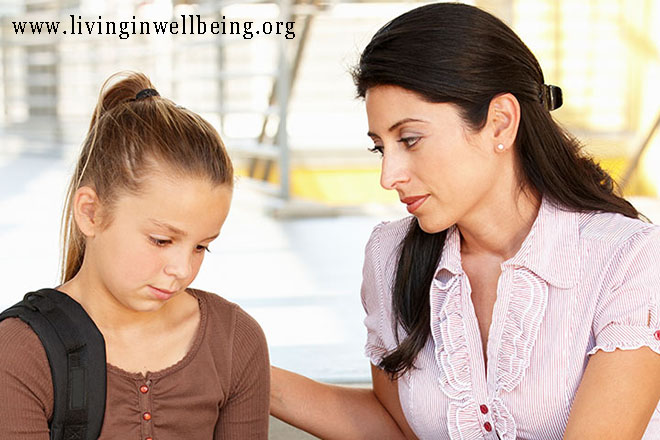 When your teen is angry and screaming at you, the temptation for many of us is to fight back and scream louder so you “win” the argument. But what does that do? It's natural to want to push back or stand up for yourself if someone pushes your buttons or provokes you in some way. We often unknowingly internalize this message and it becomes a parent’s mantra: “I’m not going to let my own child walk all over me.”

In addition to prolonging the argument—and encouraging your child to keep it going—yelling back also means that you’re giving up your power.
Related: Why “You don’t have to attend every fight you’re invited to.”

The temptation to yell or fight back is so great that it can feel nearly impossible to resist. Yet giving in to that temptation can be quite costly in ways you probably didn’t realize. When you yell or scream back at your child, it simply challenges him and effectively “ups the ante.” To put it another way, it escalates the argument. Not only that, but it keeps the fight going longer—the more you try to “win” and come out on top, the more your child fights back, so the louder you yell, and then he starts throwing things… When does it end?

Understand that in addition to prolonging the argument—and encouraging your child to keep it going—yelling back also means that you’re giving up your power. You and your child are now on the same level; you’re equal. You are engaging in the same exact behavior and as long as you do that, you’re only going to get more of it from your child time and time again. By bringing you down to his level, your child gains the perception that he’s in control because he can make you lose control by getting you angry.

Related: How to step out of the daily power struggles with your child and start parenting effectively.

The Brain of an Angry Teen

First and foremost, it’s important to realize that even though adolescents might engage in adult-like behaviors or try to act like adults, they do not have the brains of adults. The brains of adolescents are still developing, and they continue to do so into their early to mid-twenties. That considered, it does not make sense to really expect children to act like we do as adults. In fact, kids often perceive things in a very different way than we do, in part due to faulty or distorted thinking. The danger comes in when they use this distorted thinking to justify or rationalize their angry behavior.

In the Total Transformation Program, James Lehman identifies several different kinds of faulty thinking that kids experience. Keep in mind that faulty thinking is not something someone engages in intentionally. Rather, these are automatic thoughts, like “It’s not my fault that I broke the door. I was mad at my brother.” Or, “My teacher’s a jerk. Why should I do what she says?” If you pay attention to your own thoughts, I’m sure you’ll find that you experience faulty thinking from time to time as well, because it doesn’t just occur in children—we all do it.

Related: Why faulty thinking is at the heart of irresponsibility and inappropriate behavior.

What Not to Do

Yell, curse, or name-call: There’s no excuse for abuse—not by your child and not by you. In the same way that playing the victim role is no excuse for your child to abuse someone else, your child abusing you does not excuse your yelling, cursing, or name-calling. Being verbally abusive to your child only makes things worse, both in the short-term when the argument escalates, and in the long-term when your child’s behavior doesn’t change and your relationship becomes strained.

Threaten with consequences: It’s always most effective to avoid threatening your child with specific consequences in the heat of the moment. For example, saying, “If you don’t stop, I’m taking your computer for 3 days” is not likely to get your child to suddenly stop yelling and retreat to his room. Instead, it will upset your child even more and keep the argument going. What’s more effective is to say, “If you choose not to go to your room and calm down, there will be a consequence later” and then walk away.

Related: How to give consequences effectively.

Attempt to control your child: This is one of the biggest stumbling blocks for parents. We hear from parents every day who, without realizing it, are trying to control their children. I think this is due, in part, to some common confusion about accountability and what that really means. Holding your child accountable does not result in a child who is obedient 100 percent of the time. It does not mean that your child will always choose to follow the rules even if you give him consequences consistently when he misbehaves. Accountability means that you set the rules and the limits, and you provide a consequence when your child decides to break the rules—period. The goal is not to prevent your child from ever breaking the rules. You’re not a puppeteer; you’re a limit-setter. Let your child make his own choice. Limits and rules were literally made to be crossed and broken because that’s how we, as humans, learn about consequences and accountability.

Another way to look at accountability is this: If your child doesn’t follow the rules, someone will find out and there will be a “price” to pay, a “cost” for his poor choice in the form of the temporary loss of a privilege he enjoys. When a child experiences this unpleasant outcome, he can use that information to help him think about things next time he is considering breaking the rules. He’ll learn to ask himself, “Is it worth it?” as he is making his choices in the future.

Get physical: This often goes hand in hand with trying to control your child. Your child didn’t turn the X-box off when you told him to, so you try to take the controller or the console itself in the heat of your argument when everyone’s emotions are running high. Or, your child threatens to leave the house when she’s angry so you try to physically keep her in the home by blocking her path or holding her back physically. Let me be clear: it’s not a good idea to get physical with your child, first and foremost because it shows your child that the way to gain control of a situation is to use physical force. Secondly, you run the risk of escalating the entire situation. Remember how we talked about that natural urge to fight back? Well, I’m sure you know that urge is very real for your teen as well. I’ve heard many stories from parents about their kids striking back in response to the parent getting physical with them first. Don’t risk it. It’s not worth it.

Try to “win”: If you’re one of those parents who already knows that the way to gain control of an argument with your child is to walk away and calm yourself down, then you can disregard this point. Realize that if you continue to try to “win” every battle with your child, you will lose “the war.” To be honest, I don’t like using “war” and “battle” comparisons because it makes it sound as if your child is your enemy. It may feel like it more often than not, but remember, your child is not really your enemy—he is a kid in need of some more effective problem-solving skills.

What I have found is that the goal for most parents I talk to is to raise their child to be respectful, accountable adults that can make it on their own in this world. If that’s the case for you, then think carefully about the battles along the way. James Lehman says, “Pick your battles, and be prepared to win the ones you pick.” This means asking yourself “Is it worth it?” before you go charging into “battle” with your child. It doesn’t mean to “win” by out-yelling your child—it means that you succeed by using effective strategies that are going to help you achieve that long-term goal.

What to Do: Try These Techniques Instead

Pick your battles and consider walking away: As mentioned above, ask yourself if it’s worth it to deal with this issue. Does it need to be dealt with right now? Should you take some time to calm down before you address it with your child? Are your buttons being pushed? Think about the situation carefully and allow some time for things to cool down. You can address it later if you still feel the issue is important after you’ve thought it through.

Use a business-like tone: James Lehman talks about the concept of treating your family like a business in the Total Transformation program. You’re the CEO of your “family business,” so when things are turbulent, remember to address your child in the same tone with which a professionally-mannered boss would address an employee with a performance issue. Stay calm and neutral, and stick to the facts.

Self-disclosure: Let your child know you’re having a hard time communicating with them in the moment. It’s perfectly okay to say things like, “It’s really hard for me to listen and talk to you when you’re screaming at me,” or “When you scream at me, I don’t really feel like helping you.” This is a simple way to set a limit with your child and let them know their behavior isn’t working.

Challenge your child’s thinking: When I say “challenge” here I don’t mean invite your child to keep sparring with you by saying things like, “You think you’re pretty tough, big guy!?” What I mean is to point out that his behavior is ineffective. Say to your child, “I know you want to go to the mall, but talking to me like that is not going to get you what you want,” or “I get that you’re angry, but screaming at me isn’t going to get me to let you play your video games before your homework is done.”

Related: Trapped in a screaming match with your child?